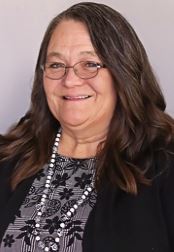 Vice-Chairman Peggy Judd is a lifelong resident of Cochise County and has resided in Willcox, AZ most of her life. She is a member of the Eastern Arizona Counties Organization, the Department of Homeland Security Regional Administrative Council and is Chairman of the local board for the Emergency Food and Shelter Program (EFSP).

Judd earned her certification in Architectural Drafting from the Phoenix Institute of Technology and a Bachelor of Science degree in Anthropology from the University of Arizona. She is a former member of the Arizona House of Representatives and served in the 2011-2012 legislature. While serving rural Arizona, she was a member of the Agriculture and Water, Energy and Natural Resources, and Health and Human Services committees.

More of Peggy Judd’s current and former roles include:

Peggy Judd is married to Kit Judd, they have been married for over 38 years and have five children and 15 grandchildren.